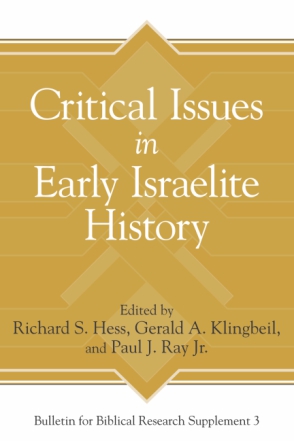 For three days in March 2004, a group of scholars met to consider the state of the question and to provide a response to the predominant academic skepticism, a response that considers the biblical text to be an important datum in the construction of the history of the people of Israel. To do so, the authors of the papers read at the conference take into account both biblical and extrabiblical literary evidence, as well as the contributions of archaeology, to describe as completely as possible what may be known about the early history of Israel. Critical Issues in Early Israelite History publishes the papers read at this conference in the hope that the result will be a balanced portrayal of this watershed event based on all of the currently available evidence.

The Jericho and Ai of the Book of Joshua Richard S. Hess

The Persian Period and the Origins of Israel: Beyond the “Myths’ Efraín Velázquez II

Classical Models for the Appearance of Israel in Palestine Paul J. Ray Jr.

The Appearance of Israel in Canaan in Recent Scholarship Patrick Mazani

“Between North and South”: The Archaeology of Religion in Late Bronze Age Palestine and the Period of the Settlement Gerald A. Klingbeil

The Context of Early Israel Viewed through the Archaeology of Northern Mesopotamia and Syria Mark W. Chavalas

The Survey of Manasseh and the Origin of the Central Hill Country Settlers Ralph K. Hawkins

Israelite Settlement at the Margins of the Northern Hill Country: Connections to Joshua and Judges from Tell Dothan Daniel M. Master