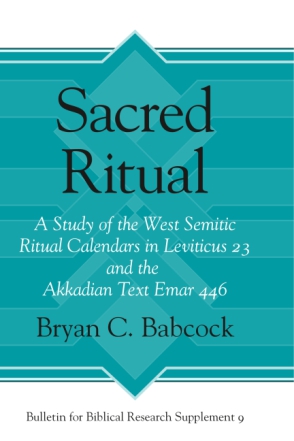 Building on the recent work of Klingbeil and Sparks, this book presents a new comparative methodology for exploring potential textual relationships. Babcock investigates the attributes of sacred ritual through the lens of sacred time, sacred space and movement, sacred objects, ritual participants, and ritual sound. The author begins with a study of ancient Near Eastern festival texts from the 3rd millennium through the 1st millennium. This analysis focuses on festival cycles, common festival attributes, and the role of time and space in ritual. Babcock then moves on to an intertextual study of biblical festival texts before completing a thorough investigation of both Lev 23 and Emar 446. The result is a compelling argument that Lev 23 preserves an early West Semitic festival tradition and does not date to the exilic era—refuting the scholarly consensus.

This illuminating reading stands as a model for future research in the field of ritual and comparative textual studies.

Overview of Ritual Development in the Ancient Near East

Overview of Leviticus 23 Research in Light of Related Biblical Texts

Introduction to the Study of Leviticus 23

Connection between the Texts