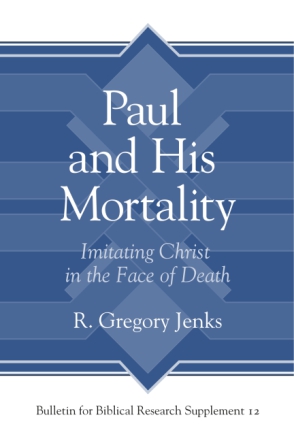 Paul and His Mortality: Imitating Christ in the Face of Death explores how Paul faced his death in light of a ministry philosophy of imitation: as he sought to imitate Christ in his life, so he would imitate Christ as he faced his death. In his writings, Paul acknowledged his vulnerability to passive death as a mortal, that at any moment he might die or come near death. He gave us some of the most mournful and vitriolic words about how death is God’s and our enemy. But he also spoke openly about choosing death: “My aim is to know him . . . to be like him in his death.” This study seeks to show that Paul embraced death as a follower and imitator of Christ because the benefits of a good death supersede attempts at self-preservation. For him, embracing death is gain because it is honorable, because it reflects ultimate obedience to God, and because it is the reasonable response for those who understand that only Jesus’s death provides atonement.

Studying mortality is paradoxically a study of life. Peering at the prospect of life’s end energizes life in the present. This urgency focuses on living with mission in step with God, the Creator and Sustainer of life, who is rightly referred to as Life itself. By focusing on mortality, we focus on Paul’s theology of life in its practical aspects, in particular, living life qualitatively, aware of God’s kingdom and mission and our limited quantity of days.

2. The Semantics of Mortality

3. Mortality among the Gentiles

4. Mortality among the Jews: The Torah

5. Mortality among the Jews: The Rest of the Old Testament Canon

6. Mortality among the Jews: The Intertestamental Period

8. The Nascent Church and Voluntary Death

11. Conclusion: Paul and His Mortality

Appendix A: The Date of Paul’s Death