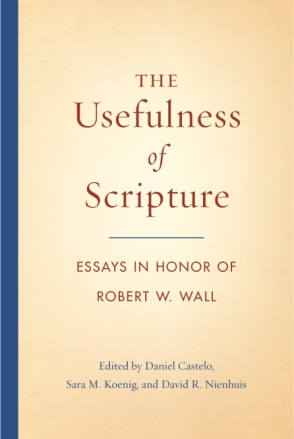 Robert Wall began his teaching career at Seattle Pacific University in 1978. Now, forty years later and in celebration of his seventieth birthday, colleagues and former students have gathered to produce this volume in honor of their friend and teacher. The results are sure to delight all of those who have studied under or been friends of Professor Wall.

The essays are grouped under two general themes: theology and methodology (with an emphasis on Wesleyan biblical hermeneutics, canonical perspectives, and the implications of these approaches for church life and work) and biblical texts/themes, especially with a view to the relationship of the study of Scripture to the life of the Christian. In both of these areas, the contributions bear in mind Wall’s conviction that academic study and spiritual life need not—in fact, should not—be kept apart.

“All in all this is a collection of theologically rich, exegetically sensitive, and interpretatively wise essays. It is a suitable tribute to a scholar whose work has developed in all those ways over many years. I commend it to readers who would like to see good examples of a canonical approach in practice, both on a conceptual level and in the handling of specific texts.”—Richard S. Briggs, Society of Biblical Literature

“Taken as a whole, this book demonstrates Scripture’s usefulness in a variety of ways: useful for honing one’s interpretative, critical skills (Knapp, Koenig, Castelo, Lemcio, Painter), useful for enabling an “ecumenical reading” that values and honors other faith traditions (Spina), useful for redeeming a christological focus in the entire Scripture (Smythe), useful in forming disciples and for spiritual, ethical practice (Robinson, Levison, Holmes, Fowl). The book also helps one to appreciate the nature of Scripture as having many voices, requiring hermeneutical acuity. It will offer the reader profit with delight.”—Derek Tovey, Review of Biblical Literature

Daniel Castelo is a Christian theologian who is currently researching and writing in the areas of the doctrine of the Holy Spirit (pneumatology) and Latino/a studies.

Part One: Essays on Theology and Methodology

Israel as a Figure for the Church: The Radical Nature of a Canonical Approach to Christian Scripture (Frank Anthony Spina)

But As For You: Pastoral Leadership in a Post-Institutional Time (Anthony B. Robinson)

“Son of Man” in Psalm 8, Psalm 79, and Daniel 7: An Exercise in a Contrapuntal Biblical Theology of the Septuagint (Eugene E. Lemcio)

The Spirit in Israel’s Story: An Antidote to Solipsistic Spirituality (Jack Levison)

Reading the Way to Heaven

A Wesleyan Theological Hermeneutic of Scripture

The Unfolding of Your Words Gives Light

Studies on Biblical Hebrew in Honor of George L. Klein