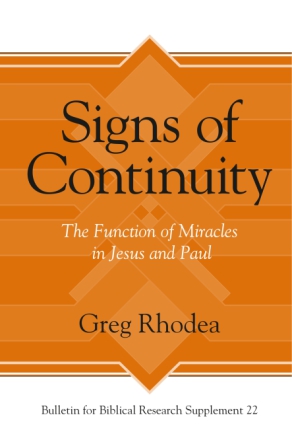 In his close analysis of the miracles performed by Jesus and Paul, Greg Rhodea points to signs of continuity between these two historical figures of Christianity. He argues that both Jesus and Paul understood their miracles as accompanying and actualizing a message of gracious inclusion of the marginalized, resisted proving their ability to work miracles to those who asked for a sign despite the importance of miracle-working to their personal authentication, and interpreted miracles as proof of the presence of the eschatological kingdom. Based on these similarities, Rhodea concludes that Paul the apostle knew of Jesus’s miracles and that he imitated Jesus in his own ministry of miracle-working.

In highlighting this previously unexplored area of continuity, Rhodea makes a significant contribution to the debate over the relationship between Jesus and Paul. Biblical scholars and students interested in this debate will find Signs of Continuity enlightening and informative.

Chapter 3 Signs of Authoritative Power with a Lifestyle of Weakness

Chapter 4 Signs of the New Age

Chapter 5 Paul and the Miracles of Jesus: Knowledge, Continuity, and Dependence

Wealth in Ancient Ephesus and the First Letter to Timothy

Fresh Insights from Ephesiaca by Xenophon of Ephesus