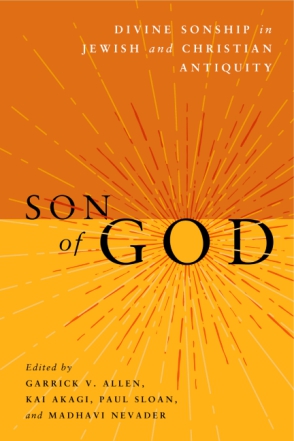 Through close readings of relevant texts from multiple ancient corpora, including the Hebrew Bible, the New Testament, the Dead Sea Scrolls, Greco-Roman texts and inscriptions, early Christian and Islamic texts, and apocalyptic literature, the chapters in this volume engage a range of issues including messianism, deification, eschatological figures, Jesus, interreligious polemics, and the Roman and Jewish backgrounds of early Christianity and the authors of the Dead Sea Scrolls. The essays in this collection demonstrate that divine sonship is an ideal prism through which to better understand the deep interrelationship of ancient religions and their politics of kingship and divinity.

Garrick V. Allen is Lecturer in New Testament at Dublin City University and Research Associate at the Department of Ancient and Modern Languages and Cultures at the University of Pretoria.

Part I: Son of God in Early Jewish Literature

1 Son of God and Son of Man: 4Q246 in the Light of the Book of Daniel—Reinhard G. Kratz

2 Son of God, Sons of God, and Election in the Dead Sea Scrolls—George J. Brooke

3 Son of God in Wisdom 2:16–18: Between the Hebrew Bible and the New Testament—Jan Joosten

4 Son of God in the Book of Revelation and Apocalyptic Literature—Garrick V. Allen

5 Whose Son Is the Messiah?—Matthew V. Novenson

Part II: Son of God in Early Christianity and the Gentile World

9 Son of God in Gentile Contexts (That Is, Almost Everywhere)—Michael Peppard

10 “Declared to Be Son of God in Power”: Romans 1:4 and the Iconography of Imperial Apotheosis—Sarah Whittle

11 “To Become like His Brothers”: Divine Sonship and Siblingship in Hebrews—Mateusz Kusio

12 Son(s) of God: Israel and Christ: A Study of Transformation, Adaptation, and Rivalry—Menahem Kister

13 What Does God Get Out of It? Reciprocity and Divine Sonship—Michael A. Lyons

Divine Anthropomorphism in the Pentateuch