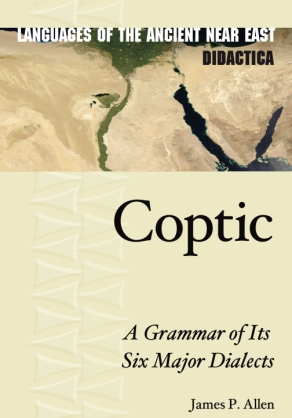 Languages of the Ancient Near East Didactica

Unlike previous grammars that focus on just two of the Coptic dialects, this volume, written by senior Egyptologist James P. Allen, describes the grammar of the language in each of the six major dialects. It also includes exercises with an answer key, a chrestomathy, and an accompanying dictionary, making it suitable for teaching or self-guided learning as well as general reference.

James P. Allen is Charles Edwin Wilbour Professor of Egyptology at Brown University. His research focuses on ancient Egyptian religion and on the grammar and literature of the ancient Egyptian language. He has served as Curator of Ancient Egyptian Art at the Metropolitan Museum of Art and as President of the International Association of Egyptologists and is the author of A Grammar of the Ancient Egyptian Pyramid Texts, vol. 1: Unis, also published by Eisenbrauns.

Answers to the Exercises

A Grammar of the Ancient Egyptian Pyramid Texts, Vol. I: Unis