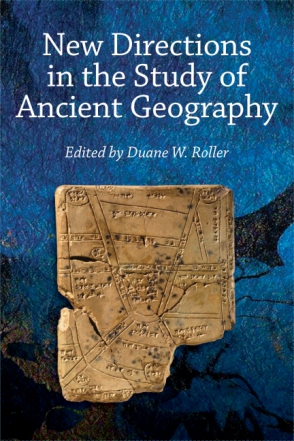 Publications of the Association of Ancient Historians

Beginning in the ancient Near East, Paul T. Keyser’s essay considers how Greek scholars—whose views on the cosmos are still relevant today—were influenced by early Near Eastern beliefs about the universe. Moving to the Hellenistic period, Duane W. Roller presents and provides commentary on a navigational guide for Ptolemaic seamen written by Ptolemy II’s chief of naval staff, Timosthenes of Rhodes. Georgia L. Irby provides an analysis of a literary map—the Shield of Aeneas from Vergil’s Aeneid—as well as a detailed study of Pomponius Mela and his Chorographia, the earliest surviving Greco-Roman geographical treatise and the only extant independent geographical work in Latin. An essay by Molly Ayn Jones-Lewis completes the volume by describing how Tacitus’s Germania, of the early second century AD, is a work heavily reliant on environmental determinism, an issue that is still relevant today.

Together, these essays demonstrate the great diversity of both ancient geographical writing and modern scholarship on ancient geography. This volume will be greeted with enthusiasm by ancient historians and classical studies scholars, particularly those interested in the cultural and political facets of geography.

Duane W. Roller is Professor Emeritus of Classics at the Ohio State University. He is the author of fourteen books, including Ancient Geography and Cleopatra’s Daughter and Other Royal Women of the Augustan Age.

1. The Kozy Kosmos of Early Cosmology

3. The Politics of Cartography: Foundlings, Founders, Swashbucklers, and Epic Shields

Georgia L. Irby, The College of William and Mary

4. Tracing the Orbis terrarum from Tingentera