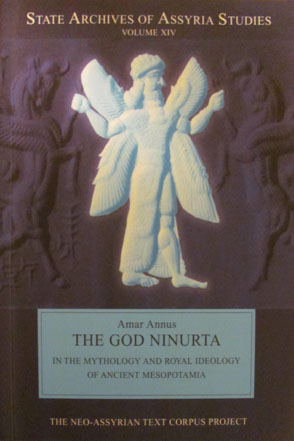 Religious syncretism is studied in the second chapter. The configuration of Nippur cults left a legacy for the religious life of Babylonia and Assyria. The Nippur trinity of the father Enlil, the mother Ninlil, and the son Ninurta had direct descendants in the Babylonian and Assyrian pantheon, realized in Babylonia as Marduk, Zarpanitu, and Nabu, and as Assur, Mullissu, and Ninurta in Assyria. While the names changed, the configuration of the cult survived, even when, from the eighth century BC onwards, Ninurta’s name was to a large extent replaced by that of Nabu.

In the third chapter various manifestations or hypostases of Ninurta are discussed. Besides the monster slayer, Ninurta was envisaged as farmer, star and arrow, healer, and tree. All these manifestations confirm the strong ties between the cult of Ninurta and kingship. By slaying Asakku, Ninurta eliminated evil from the world, and accordingly he was considered the god of healing. The healing, helping, and saving of a believer who was in misery was thus a natural result of Ninurta’s victorious battles. The theologoumenon of Ninurta’s mission and return was used as the mythological basis for quite a few royal rituals, and this fact explains the extreme longevity of the Sumerian literary compositions Angim and Lugale, from the third until the first millennium BC. Ninurta also protected legitimate ownership of land and granted protection for refugees in a special temple of the land. The “faithful farmer” is an epithet for both Ninurta and the king.

Kingship myths similar to the battles of Ninurta are attested in an area far extending the bounds of the ancient Near East. The conflict myth on which the Ninurta mythology was based is probably of prehistoric origin, and various forms of the kingship myths continued to carry the ideas of usurpation, conflict, and dominion until late Antiquity.

Ninurta in the Early Sources

The Early History of Mesopotamian Kingship

The Ur III and Isin-Larsa Periods

Evidence for the Ritual of ‘Determination of Royal Fate’ at Nippur

Babylonia in the Second Millennium

2. Ninurta in the Royal Rituals and Ideology

Ninurta as the Keeper of Royal Regalia

Nabu at the New Year Festival

Ninurta’s akitu and the Sacred Marriage

Syncretism in the Cultic Togography

Ninurta as Scribe and the Royal Investiture

Ninurta and the Monsters

Ninurta and the Deluge

Ninurta as Star and Arrow

Ninurta as Healer and Helper in Misery

‘Ninurta is My Shelter’

Ninurta and the Mountain of Stones

The Quest of Gilgamesh and the Heroic Deeds of Ninurta

Ninurta Mythology and the Myths of Kingship