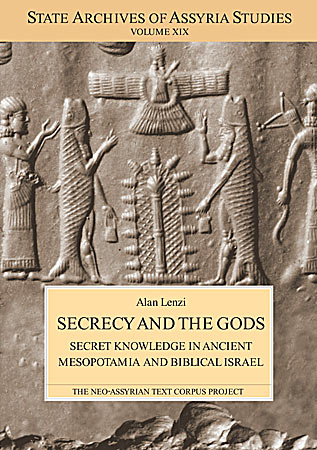 The human royal council was the social model for ancient ideas about divine knowledge being secret – just as human kings had secrets so too did the gods. Diviners who received this knowledge from the gods in an on-going, ad hoc manner were an essential link between the divine assembly and the human royal council for whom such knowledge was intended.

Scribes eventually adapted the ad hoc divinatory means of receiving divine communications to their culturally significant texts. By discursively asserting a historical connection between themselves and unique mediators with a close divine affiliation (the apkallus and Moses), the scribes constructed myths that legitimated their texts as divine revelation and claimed these were received in history through normal scribal channels. In this manner, scribes fixed the secret of the gods permanently among humans in textualized form that valorized their own position within society.

Although the origin of divine secret knowledge was rooted in a common mythological idea of the divine assembly, its treatment was quite distinct. The Mesopotamians guarded divine secret knowledge through various scribal means, including the attachment of a Geheimwissen colophon to certain tablets (treated exhaustively), whereas biblical Israel published it openly. The contrast in treatment of divine secret knowledge was directly related to different mytho-political self-understandings: Mesopotamia’s imperial aspirations versus biblical Israel’s vassaldom. As vassals to Yahweh, the divine imperial king, the kings of Judah and Israel as presented in the biblical material were not to formulate secret orders; they were only to obey them.

1. The Royal Secret Council and the Divine Assembly

2. The Textualization of the “Secret of the Gods”

3. Writing and Guarding: Circumscribing the “Secret of the Gods”

4. Secrecy, Divine Communication, and the Divine Assembly in Biblical Israel

5. Ritual Legislation as Divine Knowledge: The Mythological Authorization of the Priestly Legislation, Ezekiel’s Torah, and Deuteronomy

6. Case Studies in the Hebrew Bible

The “Secret Things” of Deuteronomy 29:28

Proverbs 8:22–31 and the Polemics of Wisdom’s Divine Authorization