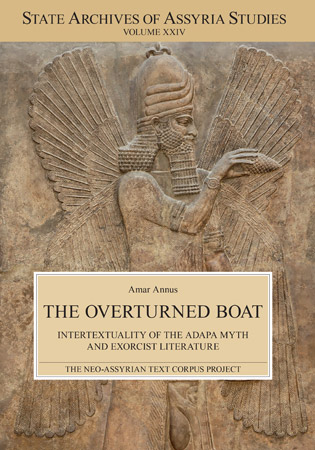 “A challenging and valuable treatment of Mesopotamian myth and ritual that takes risks few in ancient Near Eastern studies would take.”—Seth Sanders, Journal of the American Oriental Society

The Adapa myth is a literary work of ancient Mesopotamia with different versions in Sumerian and Akkadian. According to the Adapa myth, the sage and cook from Eridu goes fishing to the Persian Gulf, where the South Wind capsizes his boat. The sage’s curse breaks the wing of the South Wind. Adapa lies seven days in the ocean, whence he is summoned to heaven, to be positively judged by the sky god Anu. The present book investigates the literary development of the Adapa myth and argues that it represents an exorcistic version of the flood story with the protagonist as priest. In the Adapa myth, the primordial sage survives the flood, which serves as ideological background for exorcism, āšipūtu. The exorcist, who used fire and water as sanitizing substances during the rituals, impersonated Adapa, who had gone through an extreme form of purification himself. Adapa’s critical period in the sea was the symbolic etiology for illnesses, difficult births, witchcraft, bad omens, sin, and imprisonment, which the exorcist was able to counter. The deluge was a symbol of water ordeal and judgment, for which the exorcist’s assistance was sought. Because Adapa was given rebirth from his disaster, the human exorcist as his embodiment possessed the powers of the flood in manipulating the purifying substances and incantations against all misfortune. The identity constituting narrative of ancient Mesopotamian exorcism is explored with a methodology combining the intertextual studies with cognitive neuroscience.

“A challenging and valuable treatment of Mesopotamian myth and ritual that takes risks few in ancient Near Eastern studies would take.”—Seth Sanders, Journal of the American Oriental Society

Introduction to the Methodology

Part One: Beginning of the Cosmos

Adapa - the Sage Before or After the Flood?

The Adaba Myth in Sumerian

The Adapa Myth as the Exorcistic Flood Story

The Seasonal Placement of the Adapa Myth

Inanna and the Heavenly Boat

The Ascent to Heaven

The Adapa Myth as Ordeal Text

The Exorcistic Incantations and Adapa's Rebirth

The King in EnclosurePart Three: Adapa and Exorcism

Adapa, who Remained in Heaven

The Sages of Apsû as Witches

Sending Evil Away in a Boat

The Sinking Boat of Dumuzi

Adapa and the Cook of Alexander

The Flood Survivor and al-KhidrConclusion: The Identity of Exorcist

Appendix 2A: Critical Essay on the Comparative Method used in this Study?

The Two Views of History

The General Theory of Exorcism in the Ancient Mesopotamia

Appendix 3: The Chart of Comparanda in the Present Book