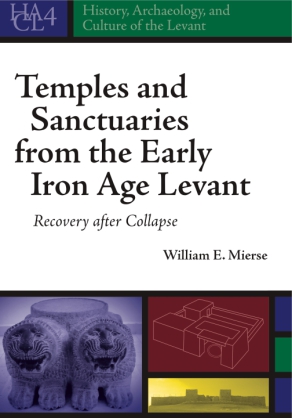 The analysis presented here is comparative and follows the methodology most commonly employed by architectural historians throughout the twentieth century. It is a formalist approach and permits the isolation of lines of continuity and the detection of discontinuity. While Mierse relies heavily on this traditional method, he also introduces some approaches from the postprocessual school of archaeology in its attempts to discern an appropriate way for cult to be investigated by archaeology.

The sanctuaries that this book presents were erected between the end of the Late Bronze Age (conventionally assigned the date of 1200 B.C.E.) and the annexation of the Levantine region into the Assyrian Empire (when Mesopotamia again became highly influential in the region). The topic concerns temples that were produced during the period when the Levant was its own entity and politically independent of Egypt, Mesopotamia, or Anatolia. During this period, the designs chosen for inclusion in this book must reflect local choices rather than resulting from imposed outside concepts.

The architecture that emerged in the wake of the downfall of the Late Bronze Age and the subsequent reemergence of social cohesiveness manifested significant changes in form and function. The five centuries under review reveal exciting developments in sacred architecture and show that, although the architects of the first millennium B.C.E. maintained important lines of continuity with the developments of the previous two millennia, they were also capable of creating novel forms to meet new needs.

Included in this fascinating volume are 90 pages of photos, drawings, floor plans, and maps.