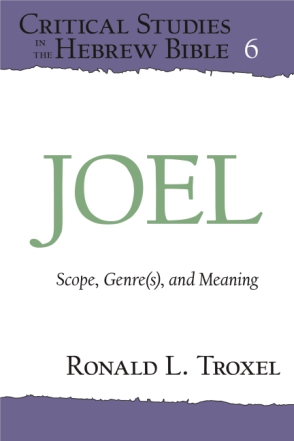 In this volume, Ronald L. Troxel acknowledges the perennial problems raised by the book, but argues that taking account of the signs of its genre elucidates numerous cruxes and spotlights salient interpretive features that are infrequently discussed. Recognizing that chapter four comprises a series of late additions permits recognition of narrative markers that unite the first three chapters as a product of schriftgelehrte Prophetie, “scribal prophecy”. The book’s features align well with those of two other prophetic narratives fashioned as composite works: Jonah and Haggai. All three books are better accounted for in this way than through the prism of redactional expansion. Correlatively, the long-standing arguments against chapter 3 as the literary continuation of chapters 1–2 prove reliant on social conceptions of prophecy that are alien to schriftgelehrte Prophetie. Instead, Troxel shows Joel 3 to be the culmination of a didactic narrative meant to prepare a future generation to survive the Day of the Lord.

The first chapter of Troxel’s study illuminates the persistent conundrums addressed in the history of interpretation, as well as the social contexts from which resolutions have been proposed. Chapters two and three address the book’s composite texture and narrative marks, while chapter four expounds its distinctive eschatology. The fifth chapter synthesizes these observations in a synopsis of Joel’s genre, scope, and meaning.

The Composite Character of Joel 1–2 0

Eschatology in the Book of Joel 2

The Prophets of Israel

Animal Imagery and the Structure of Psalms