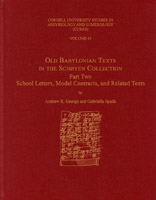 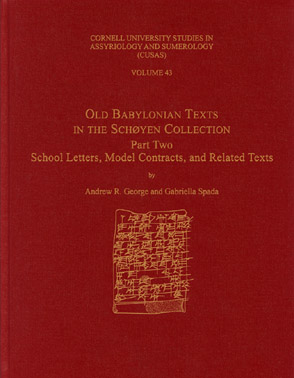 Following on Old Babylonian Texts in the Schøyen Collection, Part One: Selected Letters, this volume publishes the contents of sixty-five tablets bearing Akkadian letters used to train scribes and twenty-six prisms and tablets carrying Sumerian legal texts copied in the same context. Each text is presented in transliterated form and in translation, with appropriate commentary and annotations and, at the end of the book, photographs of the cuneiform. The material is made easily navigable by a catalogue, bibliography, and indexes.

This collection of previously unknown documents expands the extant corpus of educational texts, making an essential contribution to the study of the ancient world.

Andrew R. George is Professor of Babylonian at the School of African and Oriental Studies, University of London.

Gabriella Spada is Instructor of Assyriology in the Department of Oriental Studies at the University of Rome.