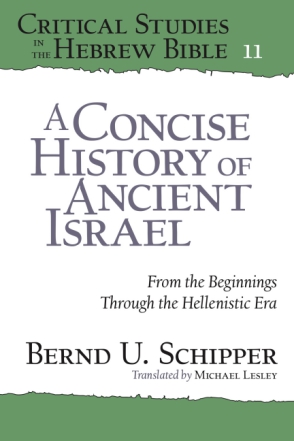 “It is an incredibly useful work that can function as a primer for more in-depth discussions of Israel and Judah’s history.”—David Schreiner, Review of Biblical Literature

The history of biblical Israel, as it is told in the Hebrew Bible, differs substantially from the history of ancient Israel as it can be reconstructed using ancient Near Eastern texts and archaeological evidence. In A Concise History of Ancient Israel, Bernd U. Schipper uses this evidence to present a critical revision of the history of Israel and Judah from the late second millennium BCE to the beginning of the Roman period.

Considering archaeological material as well as biblical and extrabiblical texts, Schipper argues that the history of “Israel” in the preexilic period took place mostly in the hinterland of the Levant and should be understood in the context of the Neo-Assyrian expansion. He demonstrates that events in the exilic and postexilic periods also played out differently than they are recounted in the biblical books of Ezra and Nehemiah. In contrast to previous scholarship, which focused heavily on Israel’s origins and the monarchic period, Schipper’s history gives equal attention to the Persian and early Hellenistic periods, providing confirmation that a wide variety of forms of YHWH religion existed in the Persian period and persisted into the Hellenistic age.

Original and innovative, this brief history provides a new outline of the historical development of ancient Israel that will appeal to students, scholars, and lay readers who desire a concise overview.

“It is an incredibly useful work that can function as a primer for more in-depth discussions of Israel and Judah’s history.”—David Schreiner, Review of Biblical Literature

Bernd U. Schipper is Professor of Hebrew Bible and Ancient Near Eastern Religion at the Humboldt University of Berlin.

1.2. The Approach of This Work

1.3. Israel/Palestine and the Southern Levant

2.1. Egypt and the Southern Levant (Fifteenth to Twelfth Cent.)

2.2. “Israel” in the Merneptah Stela and the “Conquest of the Land” (Thirteenth to Twelfth Cent.)

2.4. Philistines, “Canaanites,” Arameans, and the Early Monarchy in Israel (Eleventh to Tenth Cent.)

2.6. The Reign of Solomon and the Ancient Near East (Tenth Cent.)

2.7. The Palestine Campaign of Shoshenq I (926/925) and Solomon’s Architectural Politics

3.1. The Ancient Near East and the Western Expansion of the Neo-Assyrians

3.2. The Israelite Monarchy in the Ninth Century and the Omrides

3.3. Neo-Assyrians, Arameans, and Israelites in the Ninth Century

3.4. The Kingdom of Judah in the Ninth and Eighth Centuries

3.5. Israel in the Eighth Century and the Consolidation of the State

3.6. Judah and Its Capital Jerusalem in the Eighth Century

4.1. Hezekiah and the Growth of Judah in the Eighth/Seventh Centuries

4.2. The Anti-Assyrian Coalition from 713 and Sennacherib’s Siege of Jerusalem (701)

4.3. The Kingdom of Manasseh and the Neo-Assyrian Conquest of Egypt (Seventh Cent.)

4.4. Josiah, the Egyptian Intermezzo, and the “Cultic Reform”

5.3. The Administrative System of the Persian Empire and the Province of Yehud Until the Fourth Century

5.4. Egypt and the “Judeans/Arameans” of Elephantine

5.5. The YHWH-Sanctuary on Mount Gerizim and the Samaritans

5.6. Persian Religious Policy and the Second Temple in Jerusalem

6.1. Alexander the Great and the Rise of the Ptolemies

6.3. Jerusalem and the Ptolemies

6.4. High Priests Between Ptolemies and Seleucids

6.6. The Hasmonean Kingdom: Judea in the Second and First Centuries

6.8. Outlook: Palestine Under Roman Rule—From 63BCE to the Destruction of the Second Temple in 70 CE

Index of Place and Personal Names

The Development of God in the Old Testament