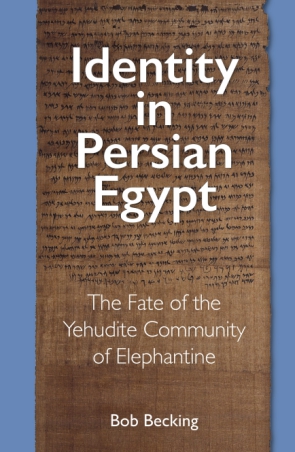 The Yehudites were among those mercenaries recruited by the Persians to defend the southwestern border of the empire in the fifth century BCE. Becking argues that this group, whom some label as the first “Jews,” lived on the island of Elephantine in relative peace with other ethnic groups under the aegis of the pax persica. Drawing on Aramaic and Demotic texts discovered during excavations on the island and at Syene on the adjacent shore of the Nile, Becking finds evidence of intermarriage, trade cooperation, and even a limited acceptance of one another’s gods between the various ethnic groups at Elephantine. His analysis of the Elephantine Yehudites’ unorthodox form of Yahwism provides valuable insight into the group’s religious beliefs and practices.

An important contribution to the study of Yehudite life in the diaspora, this accessibly written and sweeping history enhances our understanding of the varieties of early Jewish life and how these contributed to the construction of Judaism.

Bob Becking is Professor Emeritus in the Faculty of Humanities at Utrecht University.

1.1 Egypt Before the Persians

1.5 ‘The Silver and the Ebony were brought from Egypt’ or: The Character of Persian Rule in Egypt

1.6 Who was Cambyses and what exactly is meant by the verb ‘to conquer’?

3 Multi-ethnic Elephantine: Some Remarks on Different Minor Ethnicities in a Persian Border Garrison

4.5 Oaths and Other Deities

5.3 The Function of the Aramaic Version of the Behistun Inscription

6 Disruptions of the Inter-Ethnic Solidarity

6.1 A Stone of Contention

6.2 A Conflict between Egyptians and Yehudites

6.3 Burglary in Times of Turmoil

6.4 The Crisis around the Demolition of the Temple of Yahô in Elephantine

7.1 From the oasis in the desert to the Land of the Pyramids (Papyrus Amherst 63)

7.2 The Egyptian Strive for Independence

8 Beyond the Final Curtain

8.2 The Fate of the Yehudites and other Minorities

Judah and the Judeans in the Achaemenid Period

Negotiating Identity in an International Context

The Private Lives of Women in Persian Egypt