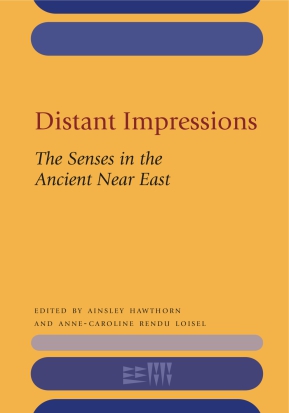 “The sensory worlds of the Hittites, Akkadians, Neo-Assyrians, and late Neolithic Halaf culture are explored in essays by different authors within this interesting, well-researched, and attractively designed work.”—T. Doran, Choice

Although we often treat the senses as though they are immutable, fundamental properties of our physiology, the way we parse our sensory experiences is dictated by our cultural context. Accordingly, the essays in Distant Impressions explore the social aspects of sensation in the ancient Near East, inviting the reader to move beyond the physiological study of sensation to an examination of its cultural meanings.

The essays in this book approach the question of sensory experience in ancient Near Eastern societies from philological, literary, art historical, and archaeological perspectives. They address the means of sense perception (such as vision, hearing, and smell) and the objects of perception (such as light, noise, and odor), examining the senses within religious, political, and social frameworks. The first part of this volume looks at the monumental architecture, bas-reliefs, and tablets of the Neo-Assyrian period, while the second explores sensory dimensions of the built environment and textual representations of sensation in other times and places, such as Neolithic northern Mesopotamia and Hittite Anatolia. Building on recent scholarship that focuses on the social aspects of sensation in history, Distant Impressions brings this approach to bear on ancient Near Eastern studies for the first time.

“The sensory worlds of the Hittites, Akkadians, Neo-Assyrians, and late Neolithic Halaf culture are explored in essays by different authors within this interesting, well-researched, and attractively designed work.”—T. Doran, Choice

Ainsley Hawthorn is an alumna of Yale University and a nonfiction author.

Anne-Caroline Rendu Loisel is Lecturer (maître de conférences) in Assyriology at the University of Strasbourg.

The Senses in the Ancient Near East: An Introduction

Chapter 1 Sensing the Sacred in the Neo-Assyrian Temple: The Presentation of Offerings to the Gods

Chapter 2 The Throne Room of Aššurnaṣirpal II: A Multisensory Experience

Chapter 3 Looking and Seeing in the Neo-Assyrian Letters

The Shifting Gaze: Looking and Seeing in the Neo-Assyrian Royal Inscriptions

Chapter 5 Architecture and Acoustic Resonance: The Tholoi at Arpachiyah Reconsidered Within a Wider Neolithic Context

Chapter 6 Toward a Classification of Akkadian Verbs of Perception

Chapter 7 Representing the Senses in Hittite Religious Texts: The Case of Sight

Chapter 8 The Caterpillar That Shouted: Akkadian Omens and Multisensoriality

Studying Gender in the Ancient Near East