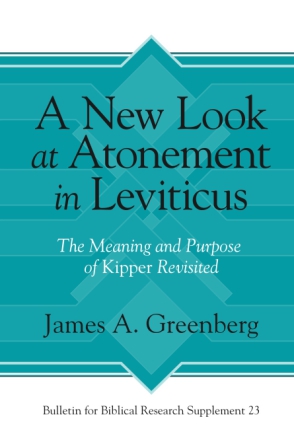 In this book, James A. Greenberg examines animal sacrifice in Priestly Torah texts found in Leviticus 1–16, Exodus, and Numbers. Through his analysis, Greenberg identifies a new valence of kipper as a process that produces a positive result between two objects and argues that the Israelite sanctuary exists to facilitate a connection between YHWH, sancta, and the Israelites through the medium of blood.

Rather than beginning with a priori assumptions of what sacrificial terms and symbols mean, Greenberg allows his interpretation to develop through an accumulation of textual clues. To avoid the exegetical pitfalls of symbolic and structuralist approaches, he focuses on what the language of the ritual says about sacrifice and what it seeks to accomplish. His investigation considers why the flesh and blood of an animal are used by the priest as he mediates on behalf of the offerer through the medium of YHWH’s sanctuary, what the difference is between intentional and unintentional sin, how the meaning of kipper changes from one sacrifice to the next, whether the sanctuary can be both holy and unclean, and how priests conceive of YHWH’s interaction with sancta, the offerer, and the animal.

A New Look at Atonement in Leviticus recalibrates our understanding of kipper and furthers our knowledge of the priestly cult in ancient Israel. It will especially interest scholars of Biblical Hebrew and the Old Testament in particular.

James A. Greenberg is an associate faculty member at Denver Seminary.

Ritual and Ritual Texts in the Bible