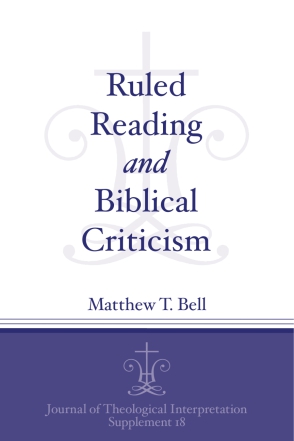 Modern prejudice holds that ancient Christian interpretation was relatively unconcerned with history and concomitantly determined to foist extrascriptural doctrinal commitments onto scripture, silencing those layers of scripture’s meaning that modern criticism has been most concerned with uncovering. In this book, Bell argues that, when the ethos and theology of reading in the early Church are taken into account, premodern interpretive priorities turn out to be less implausible than the modern world has believed them to be. Through close reading of ancient Christian texts, Bell outlines an ontology of scripture wherein the relationship between early Christianity’s “Rule of Faith,” on one hand, and its scriptures, on the other, was expressly constructed as a hermeneutical spiral, the slant of which was designed to attend to and be edified by textually mediated conundrums and intellectual provocations. Viewed along that spiral, the Church’s Rule was as “scriptural” as the Church’s catalog of scriptures was “ruled.”

This book will be welcomed by academics who study early Christianity and scripture, as well as scholars interested in reconsidering Christian hermeneutical questions for a postmodern age.

Chapter 1: Communion, Canon, and the Bible of the Church

Chapter 2: Ontology of Scripture and Indwelling Salvation’s Epic (Or, Whose Identity Story?)

Chapter 3: The Legacy of Modernity and the Methodological (Pre?)Occupations of a Critical Age

Ruled Reading in the Unfolding Epic: Concluding Reflections on the Arts of Homily and Devotional Criticism