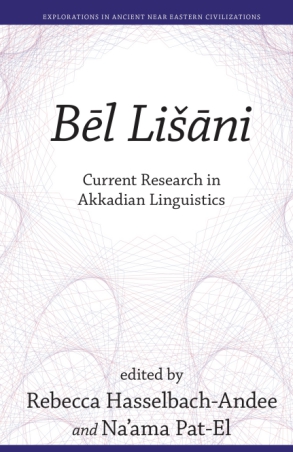 Inspired by the work of renowned linguist John Huehnergard and featuring contributions from top scholars in the field, Bēl Lišāni showcases the latest research on Akkadian linguistics. Chapters focus on a wide range of topics, including lexicon, morphology, word order, syntax, verbal semantics, and subgrouping. Building upon Huehnergard’s pioneering studies focused on the identification of Proto-Akkadian features, the contributors explore linguistic innovations in the language from historical and comparative perspectives. In doing so, they open the way for further etymological, dialectical, and lexical research into Akkadian.

An important update on and synthesis of the research in Akkadian linguistics, this volume will be welcomed by Semitists, Akkadian language specialists, and scholars and students interested in historical linguistics.

Rebecca Hasselbach-Andee is Associate Professor of Comparative Semitics at the University of Chicago and coauthor of Classical Ethiopic: A Grammar of Gəˁəz, also published by Eisenbrauns.

Chapter 1. Remarks on Word Order and the Syntax of ša-Clauses in Late Hellenistic Babylonian

Chapter 2. The Indicative Markers in West Semitic and Their

Relationship to the East Semitic Subordinative

Chapter 3. Eblaite and Akkadian: A Look at the Pronominal

Chapter 4. How the Neo- Assyrian Verb Works: Tense and Voice

Chapter 6. “All Is Number”: Verbs and Nouns Derived from the Cardinal Numbers in Akkadian

Chapter 7. Notes on the Use of the Subordinative in Oaths

Chapter 9. The Akkadian of the King of Beirut in the Late

A Sketch of Neo-Assyrian Grammar

An English to Akkadian Companion to the Assyrian Dictionaries