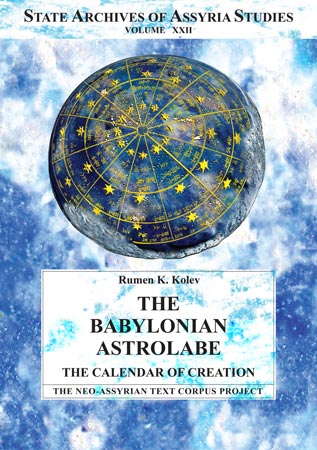 This is the first full critical edition of all currently known astrolabe texts and a ground-breaking study of their astronomical content, showing that the text as it has come down to us consists of three redactional layers dating from different time periods, the earliest of which is to be dated to prehistoric times (ca. 5000 BCE). The appendixes to the book include 255 first-hand observations of heliacal phases of stars and planets and an appendix explaining in detail the heliacal phases.

The Babylonian Astrolabe – Description and Meaning

The Discovery of the Astrolabe

The Astrolabe and the Babel-Bibel Debate

The Nature of the Astronomical Information in the Astrolabe

Previous Datings of the Astrolabe

The Goals and Method of the Present Study

PART I: STUDIES ON ASTROLABE B AND RELATED TEXTS

1. ASTRONOMICAL ANALYSIS AND DATING OF THE ASTROLABE

The Paths of Anu, Enlil and Ea

The Effects of Precession

The Random Model and the Probability Distribution

Migrant and Settled Stars in Mul Apin and the Astrolabe

The Numbers on the Circular Astrolabe

The Place of the Equinox in Astrolabe B

The Problem of the Circumpolar Stars

The Four Layers of Astronomical Information in the Astrolabe