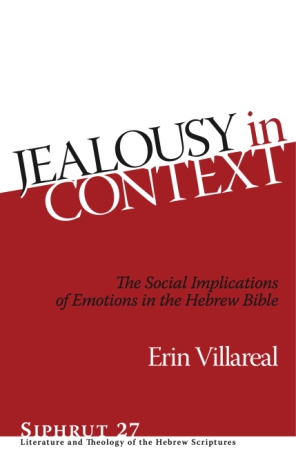 Jealousy in Context evaluates the socioliterary context of qinʾâ. Through a series of case studies examining this term as it is applied to residents, sister-wives, brothers, and husbands in biblical narrative passages, Villareal explains that qinʾâ is felt by people who experience a threat or disruption to their rights and status within a social arrangement or community and is therefore grounded in practical concerns that have social and juridical ramifications. Investigating examples of divine qinʾâ, Villareal shows that its social meaning was adapted into theological language about the Israelite deity and his relationship with the people of Israel, and that Yahweh expresses qinʾâ whenever there is a threat to the integrity of his land or his sanctuary. Villareal examines the term through this socioliterary lens to reveal ancient Israelite perceptions concerning social organization and divine-human relationships. Additionally, she explores how the socioliterary character of qinʾâ in the Hebrew Bible communicates representations of ancient Israelite beliefs, values, and social expectations.

This convincing new understanding of a key biblical term will be appreciated by students and scholars of the Hebrew Bible, Hebrew linguistics, and ancient Near Eastern societies more generally.

A New Approach to Biblical קנאה

The Social Implications of קנאה

Emotion as Part of Social Culture

Emotion as Scenario and Script

Biblical Hebrew קנאה as a Script

Chapter 2. קנאה in the Patriarchal Narratives

The Scripts of the קנאה Scenarios in Genesis

The Script of the קנאה Scenario in Numbers 5:11-31

Chapter 4. The Song of Moses and the Ideology of Land, People, and God

The Framework of the Divine-Human Relationship

The קנאה Scenario in the Song of Moses

Reevaluating the Issue of Allotment and Order

The Script of the קנאה Scenario in the Song of Moses

Chapter 5. The Divine קנאה in Ezekiel, Psalm 79, and Zechariah

The Case of Ezekiel: Divine קנאה Toward the Israelites and Adversaries

Divine קנאה in Other Relevant Works: Psalm 79 and Zechariah

The Scripts of the קנאה Scenarios in Ezekiel, Psalm 79, and Zechariah

The Narrative Context of אל קנא in Exodus 34

The Script of an אל קנא Scenario

קנאה and Jealousy: The Prototypical Scenario

The Metaphorical World of Israel's Household in the Book of Isaiah

Judah and Saul in the Narratives of Genesis and 1 Samuel

A Theology of Justice in Exodus