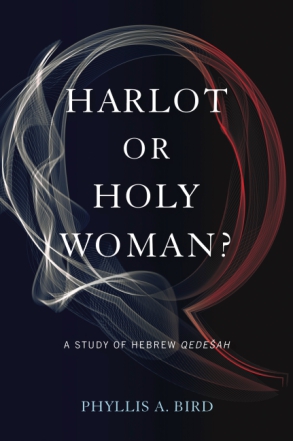 “Phyllis Bird deserves praise for amassing all this material into one volume and for her careful and insightful analysis of both biblical and extrabiblical texts.”—Elaine Adler Goodfriend, Review of Biblical Literature

Harlot or Holy Woman? presents an exhaustive study of qedešah, a Hebrew word meaning “consecrated woman” but rendered “prostitute” or “sacred prostitute” in Bible translations. Reexamining biblical and extrabiblical texts, Phyllis A. Bird questions how qedešah came to be associated with prostitution and offers an alternative explanation of the term, one that suggests a wider participation for women as religious specialists in Israel’s early cultic practice.

Bird’s study reviews all the texts from classical antiquity cited as sources for an institution of “sacred prostitution,” alongside a comprehensive analysis of the cuneiform texts from Mesopotamia containing the cognate qadištu and Ugaritic texts containing the masculine cognate qdš. Through these texts, Bird presents a portrait of women dedicated to a deity, engaged in a variety of activities from cultic ritual to wet-nursing, and sharing a common generic name with the qedešah of ancient Israel. In the final chapter she returns to biblical texts, reexamining them in light of the new evidence from the ancient Near East.

Considering alternative models for constructing women’s religious roles in ancient Israel, this wholly original study offers new interpretations of key texts and raises questions about the nature of Israelite religion as practiced outside the royal cult and central sanctuary.

“Phyllis Bird deserves praise for amassing all this material into one volume and for her careful and insightful analysis of both biblical and extrabiblical texts.”—Elaine Adler Goodfriend, Review of Biblical Literature

Phyllis A. Bird is Professor Emerita of Old Testament Interpretation at Garrett-Evangelical Theological Seminary. She is the author of Missing Persons and Mistaken Identities: Women and Gender in Ancient Israel; Faith, Feminism, and the Forum of Scripture; Feminism and the Bible; and The Bible as the Church’s Book.

3. Sir James George Frazer and the Concept of Sacred Prostitution

5. New Sources from the Ancient Near East

6. Qedešah in the Hebrew Bible

Appendix A. Synopsis of Classical Sources in Constructions of Sacred Prostitution

Studying Gender in the Ancient Near East

Women and Power in Neo-Assyrian Palaces

Beyond Hearth and Home

Women in the Public Sphere in Neo-Assyrian Society