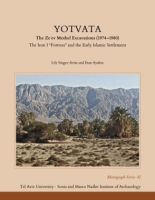 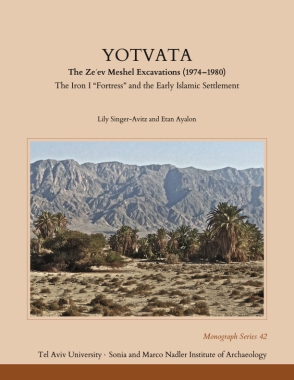 Monograph Series of the Sonia and Marco Nadler Institute of Archaeology

The Iron I remains consist of an irregular casemate wall surrounding a courtyard. The location of this site suggests that the settlement was established in order to protect the water sources and to overlook and supervise the nearby crossroads. Based on the relative proximity of the site to Timna, it may be concluded that the oasis formed the main source of water and wood for the population involved in copper production in that region.

The rich finds uncovered at the Early Islamic settlement—including a large courtyard building and a nearby bathhouse, among other structures—point to habitation from the end of the seventh to the early ninth century CE. The proximity of the settlement to a sophisticated irrigation system (qanat) and the administrative/economic ostraca discovered at the site suggest that it served as the center of an agricultural estate owned by an elite Muslim family. Among the unique finds is a large assemblage of locally produced, handmade pottery, which is thoroughly studied here.

The findings from the excavations at the Yotvata oasis have made a major contribution to the study of Early Islamic settlement and material culture in the greater Arabah region and beyond.

Lily Singer-Avitz is Recorder and Pottery Researcher at Tel Aviv University. She is the author of Beer-Sheba III: The Early Iron IIA Enclosed Settlement and the Late Iron IIA–Iron IIB Cities, also published by Eisenbrauns, as well as numerous scholarly articles.

Etan Ayalon is an expert in ethno-archaeology and the material culture of the Land of Israel and has curated a variety of exhibitions in Israeli museums. He has participated in more than eighty archaeological excavations and archaeological and ethnographic surveys in Israel and published numerous books and papers.