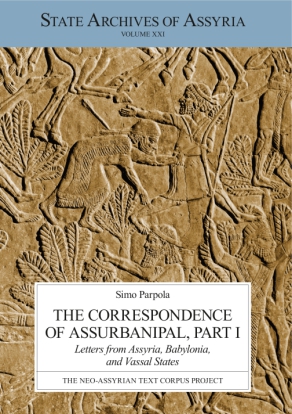 The present volume presents a critical edition of all currently known letters authored by Assurbanipal as king of Assyria as well as 61 letters sent to him or his agents during his reign. Most of these texts pertain to the Šamaš-šumu-ukin revolt and the conflict with Elam, and provide a fascinating “ringside” view to these catastrophic events, which are otherwise known only from propagandistic and tendentious royal inscriptions. Almost half of the texts have never been edited or translated before and very few of them have been translated after 1935. They constitute an invaluable source not only for the study of Assyrian history but also of the personality and psyche of the last great king of Assyria.

Simo Parpola is Professor Emeritus of Assyriology at the University of Helsinki.

The Geographical Coverage of the Correspondence

The Chronology of the Letters

The Contents of the Letters and Their Political and Historical Contexts

The Process of Composing the Royal Letters; Languages and Scripts

On the Present Edition

2. Letters to Uruk, Ur, and Kissik

3. Letters to Bel-ibni and the Sealanders

6. Letters to Vassal Rulers, and Miscellany

7. Letters from the King’s Brothers

9. Letters from Elam and Urarṭu

Letters from Assyrian Scholars to the Kings Esarhaddon and Assurbanipal

Letters from Assyrian Scholars to the Kings Esarhaddon and Assurbanipal

Women and Power in Neo-Assyrian Palaces